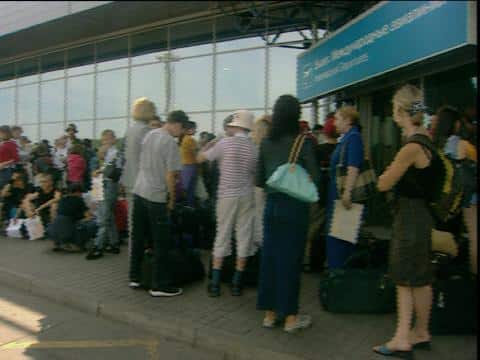 A German cargo plane collided with Bashkirian Airlines Tupolev 154.52  children aboard the Russian plane was from the political elite families of Russia’s oil-rich Bashkortostan region. They headed to an event organized by UNESCO, the U.N. science and education body. The Russian plane carried a 12 member crew and 5 adult passengers in addition to the youngsters. Air crash happened at 36,000 feet over  Germany. The video includes an Interview with the Bashkirian Airlines representatives.

Plane Crash Accident after takeoff from the Yaroslavl Airport in Western Russia.

It is the Biggest air catastrophe in modern Russia. A charter Yak-42 crashed on takeoff from the Yaroslavl airport in Tunoshna. Onboard, the aircraft was the entire core team and coaching staff of the Lokomotiv hockey club. Of the 45 people on board, only one survived.

July 1, 2002, stock footage video of Bashkirian Airlines Flight 2937 Tupolev charter flight from Moscow to Barcelona. The plane was flying over southern Germany. It collided with flying from Italy to Belgium over the city of the German-Swiss border.

TVDATA Russian Stock Footage Collection also includes archival videos. For example, Kremlin during Soviet times when official residence hosts various Soviet and Russian politicians.  As an example, we have black and white footage of Brezhnev meeting foreign politicians in the Kremlin, Russia. At TVDATA Media we provide professional camera crew services in Russia. Therefore, you can hire a cameraman who is specialized in drone aerial filming.