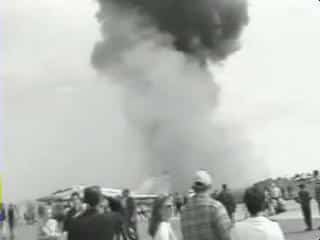 Footage of air show disaster tragedy happened on 27th of July 2002. A pilot Volodymyr Toponar and co-piloted Yuriy Yegorov crashed a Ukrainian Air Force Sukhoi Su-27. These are the moments of the catastrophic crash, a real-time caught on camera footage. The disastrous event happened during an aerobatics performance at Sknyliv airfield near Lviv in Ukraine.