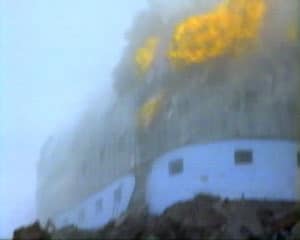 On August 16, 1998, the operational duty officer of the Ministry of Emergency Situations of the KBR received information from the Elbrus PSO about a fire in the highest mountain hotel in Europe – Shelter 11 (4200 m).
Stock footage video of the time when the fire happened. There were about 100 people in the hotel – mostly foreigners. According to the initial information a tourist was fiddling in the kitchen with a primus stove. An open fire took out a canister of gasoline and the building burst into flames like a Christmas tree on New Year’s Eve. Although people in shorts jumped out of the windows, no one was hurt. Only 30-year-old Frenchman Didier Renaud suffered a spinal injury while rappelling from the 3rd floor. But a lot of property, documents and money burned down. Thus ended the 60-year history of a unique building in the mountains